Not long after iOS 4.0 was released I pushed a small update to Delhi City Metro to keep track of some basic (anonymous) user statistics. I’m keen to gauge the audience of any specific iOS 4 features I might consider adding and now that I’ve been able to visualise these, I thought I’d share them here.

To add a geographic angle to the iOS usage statistics you can see in the second graph that the majority of Delhi City Metro users are from India. 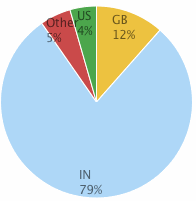