Recently I’ve been working on a project utilising ATTiny85 microcontrollers and Arduino. At first glance it wasn’t obvious if it was possible to use the AVR Dragon with Arduino or macOS High Sierra, but after some trial and error it turns out the Arduino toolchain supports programming via ISP on the Dragon quite well!

In addition to ISP programming on macOS, there was an extra step required to to power the ATTiny from the Dragon, I have covered that below. 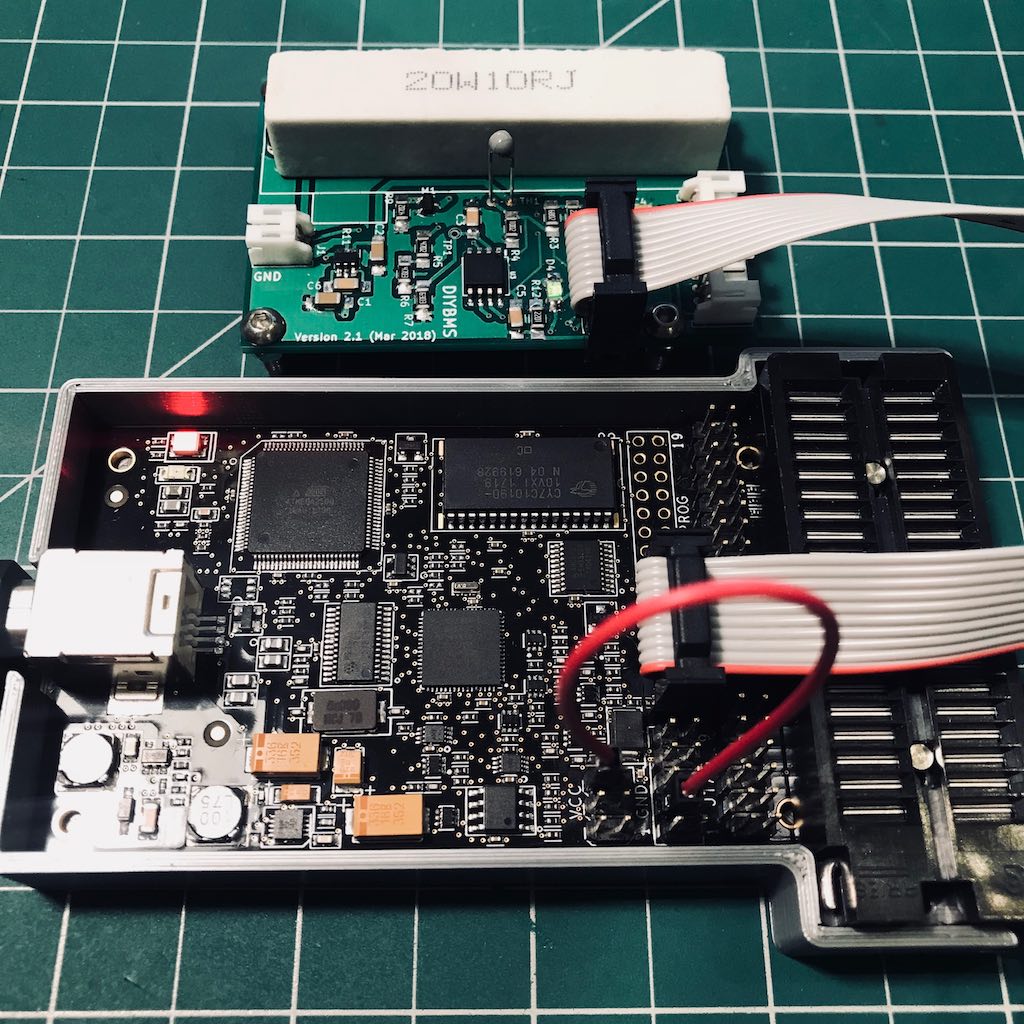 Current production versions of the Arduino IDE (1.8.5), it’s bundled version of avrdude (modified 6.3) and ATTinyCore (1.1.5) all work ‘out of the box’ and macOS High Sierra (10.13.5) requires no additional kernel extensions or drivers to use the Dragon, unlike the ATMEL ICE.

Easy to find articles on running the Dragon on macOS were written prior to the renaming of Mac OS X to macOS (2016) and the addition of the Library Manager and Board Manager in Arduino 1.6.x (early 2015). James Gregson (2012) and Jay Wiggins (2015) write about using the Dragon on Mac OS X and demonstrate the installation of avr toolchain components like avrdude, avr-libc, and avr-crosspack via homebrew rather than using Arduino.

While you’re in settings enable “Show verbose output during: upload” to see more output when Arduino is interacting with the Dragon via avrdude.

Using AVR Dragon as a Programmer

Note: The Dragon will not appear as an option in the list of available ports like you would see an Arduino Uno or a USB serial programmer.

Open a project you’d like to flash to your ATTiny, from the Tools menu set the appropriate board (ATTiny 25/45/85) and select the programmer “AVR Dragon ISP mode (ATTinyCore)”. 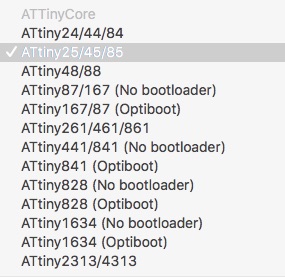 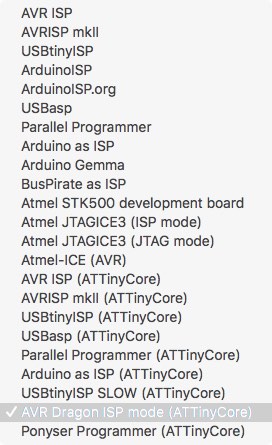 Select “Upload” and if you’ve set verbose mode as highlighted above, you’ll see all the verbose output from Arduino (avrdude) communicating with the Dragon.

A basic command to test the Dragon’s connectivity would be:

The output with -vvvv is very verbose. The number of vs can be reduced.

ATTiny85 doesn’t use a bootloader like a normal Arduino, but the “Burn Bootloader” item in the Tools menu can be used to set fuses. Read the descriptions on the different ATTiny fuses over on the ATTinyCore README.

Given my ATTiny chips don’t have their own power source, after connecting the ISP headers of the Tiny’s board and attempting up upload via Dragon I encountered this error:

An article by Josh Levine shows an easy way to provide power to the ATTiny via the ISP cable by placing a jumper from one of the the Dragon’s VCC pins to the unutilised JTAG pin 4. A continuity test with a multimeter shows JTAG pin 4 and SPI pin 2 are connected.

The image below shows a simple jumper from VCC to JTAG pin 4. 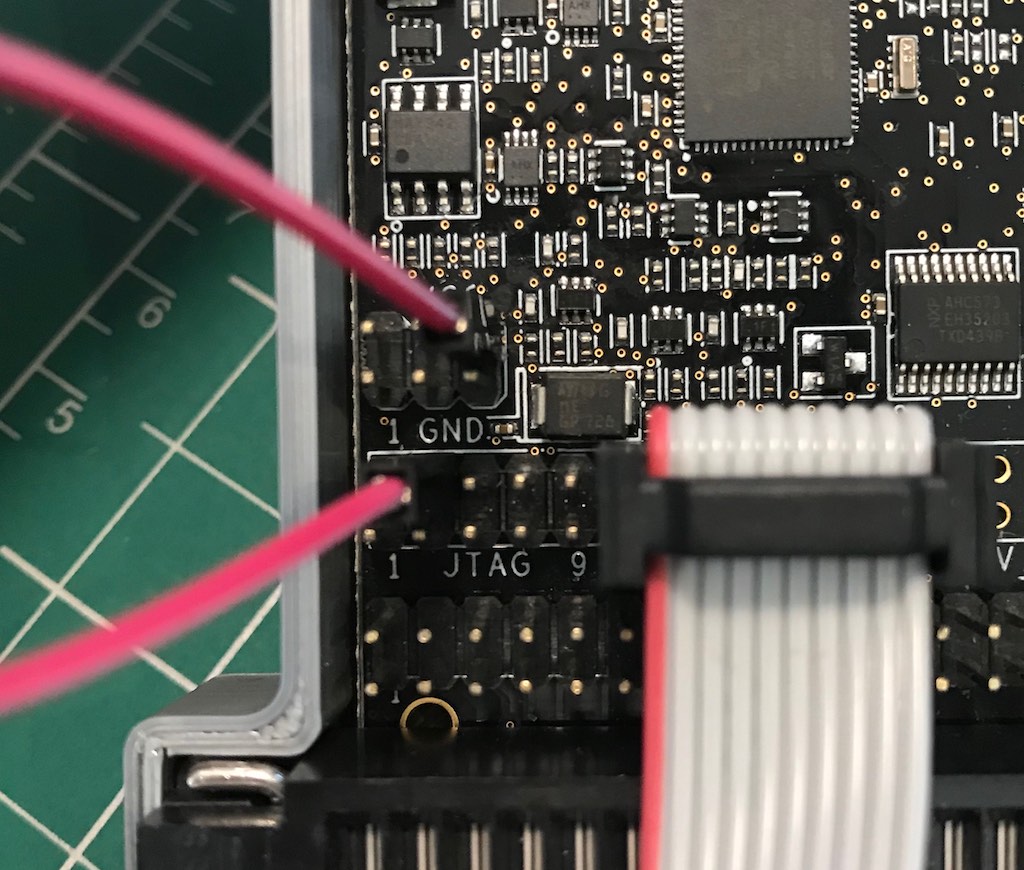 In hindsight, section 4.5 on SPI programming in the Dragon User Guide mentions this power requirement since my ATTiny is essentially ‘on board’:

AVR Dragon must sense the target voltage on pin 2 on the SPI header in order to set up the level- converters. For on-board targets, the voltage must be supplied from pin 2, 4, 6 on the VCC header (5V) into pin 2 (VTG) on the SPI header.

The current version of AVR Dragon firmware is 7.39. My Dragon purchased June 2018 came with an older version out of the box. As far as I’m aware to update the Dragon’s firmware you will need to use Atmel Studio on a Windows machine or boot up a Windows VM.

I’m unsure whether or not the firmware update is necessary to run the steps above.

At the April 2017 Melbourne CocoaHeads meetup I presented on using Swagger Codegen to automatically generate a Swift 3 API client based on a Swagger spec.

I started with an introduction to Swagger using a spec for the Melbourne CocoaHeads Events API spec and implemented a basic CocoaHeads iOS project.

At the September “Swift 4” meetup I presented a quick five minute demo generating Swift 4 code from swagger codegen. The main purpose was to show the reduction in the amount of boilerplate code generated for Swift 4.

I was recently inspired by the sheer simplicity of $22 IKEA Standing desk by Colin Nederkoorn. The “Standdesk 2200” uses basic IKEA components to easily create a standing desk conversion for your existing space.

I set out this weekend to replicate and localise Colin’s instructions for the Australian IKEA shopper. Colin’s original $22 USD price point holds up perfectly in 2015. Converted to Australian dollars, we have the $33 IKEA Standing Desk.

All prices mentioned here are in Australian dollars and include 10% GST. 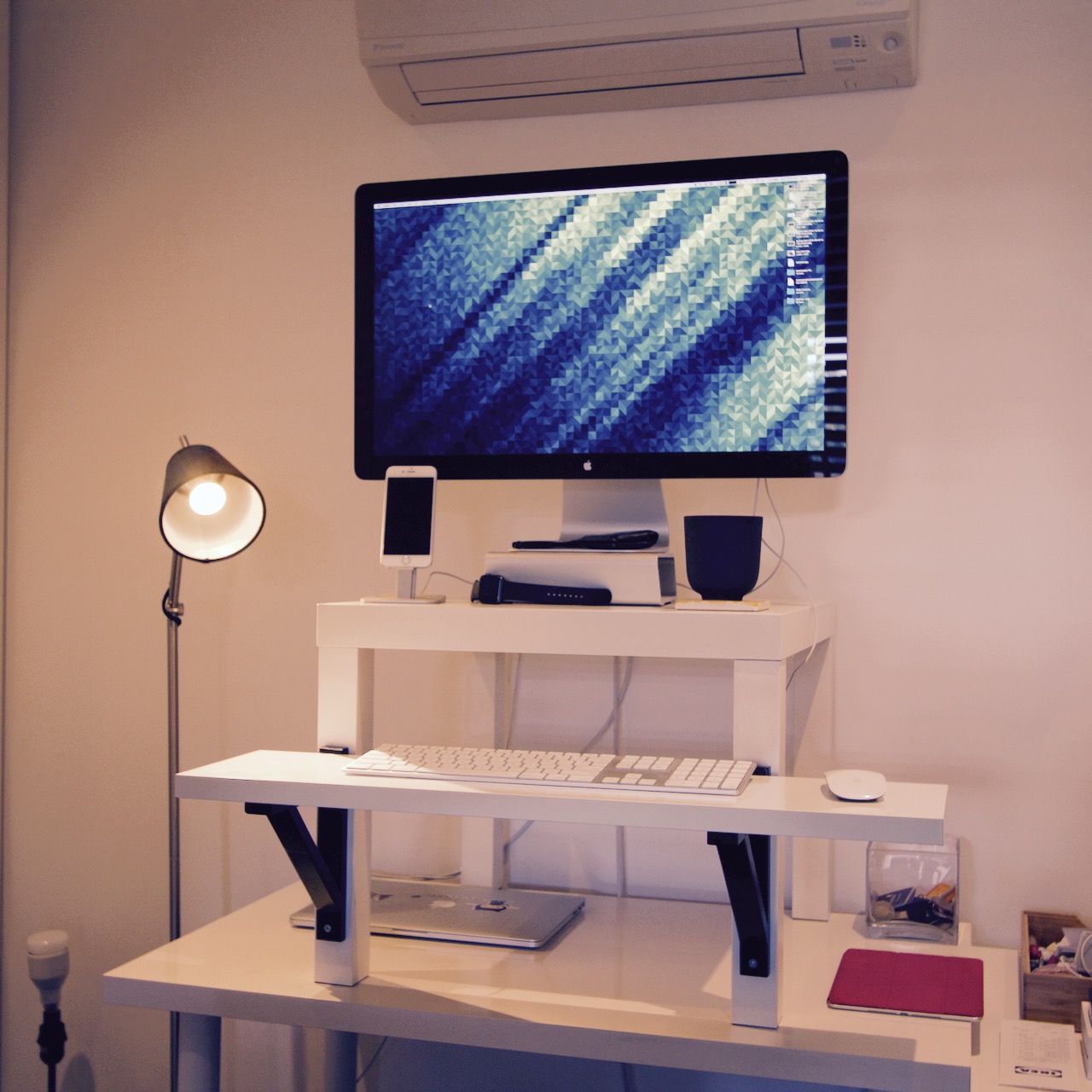 I recommend reading Colin’s article, as he highlights two main measurements; the keyboard height and the monitor height. 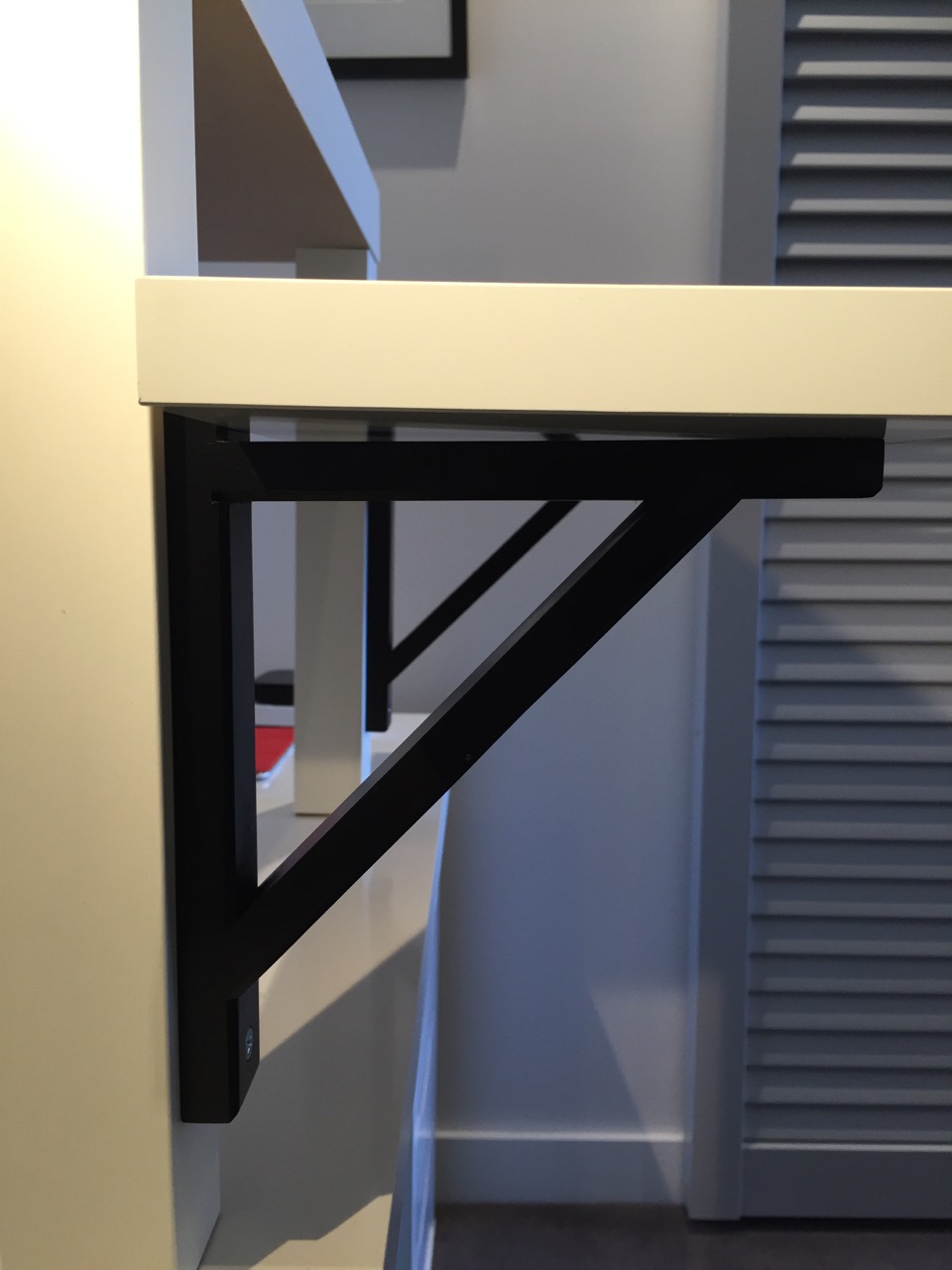 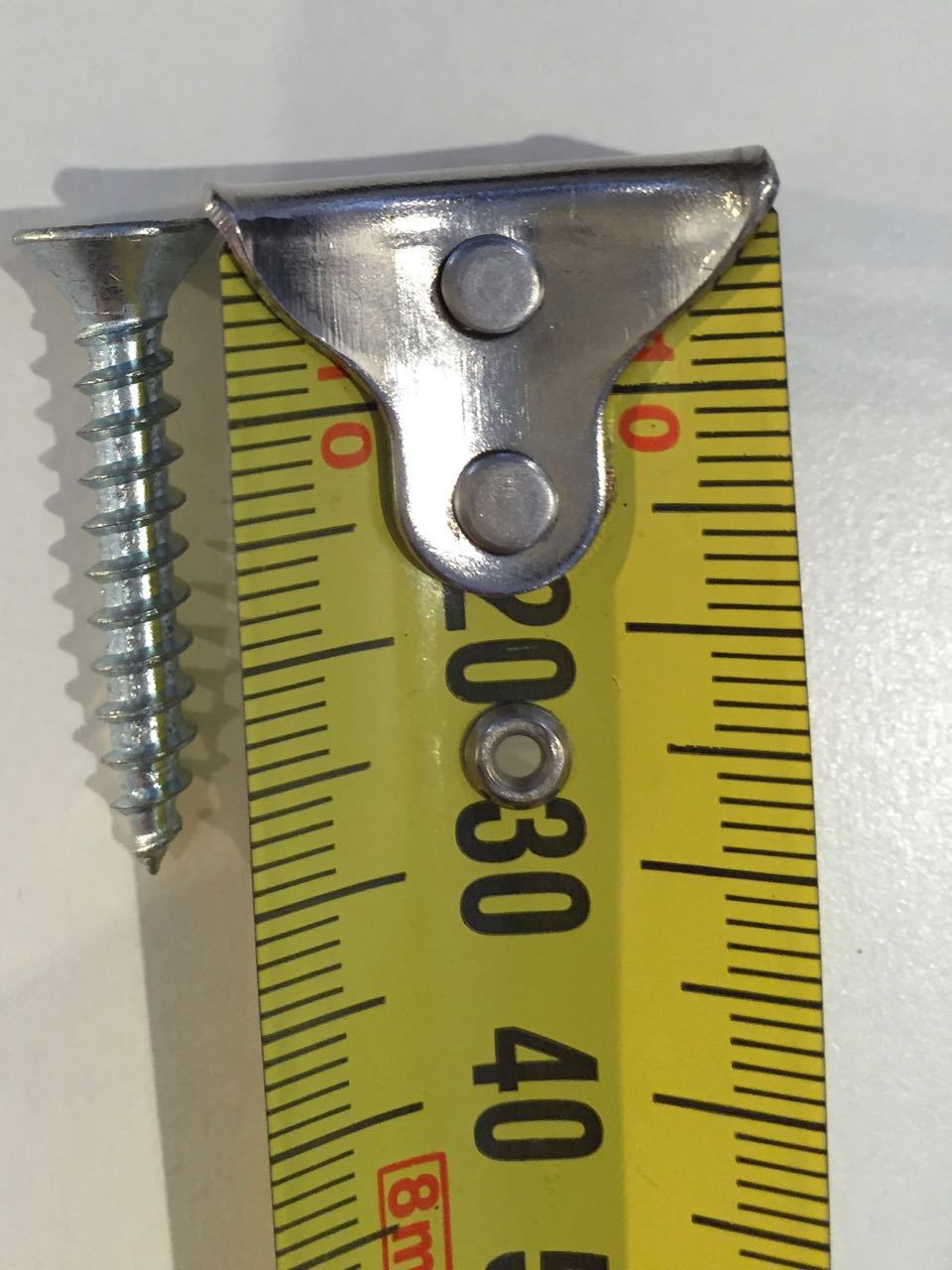 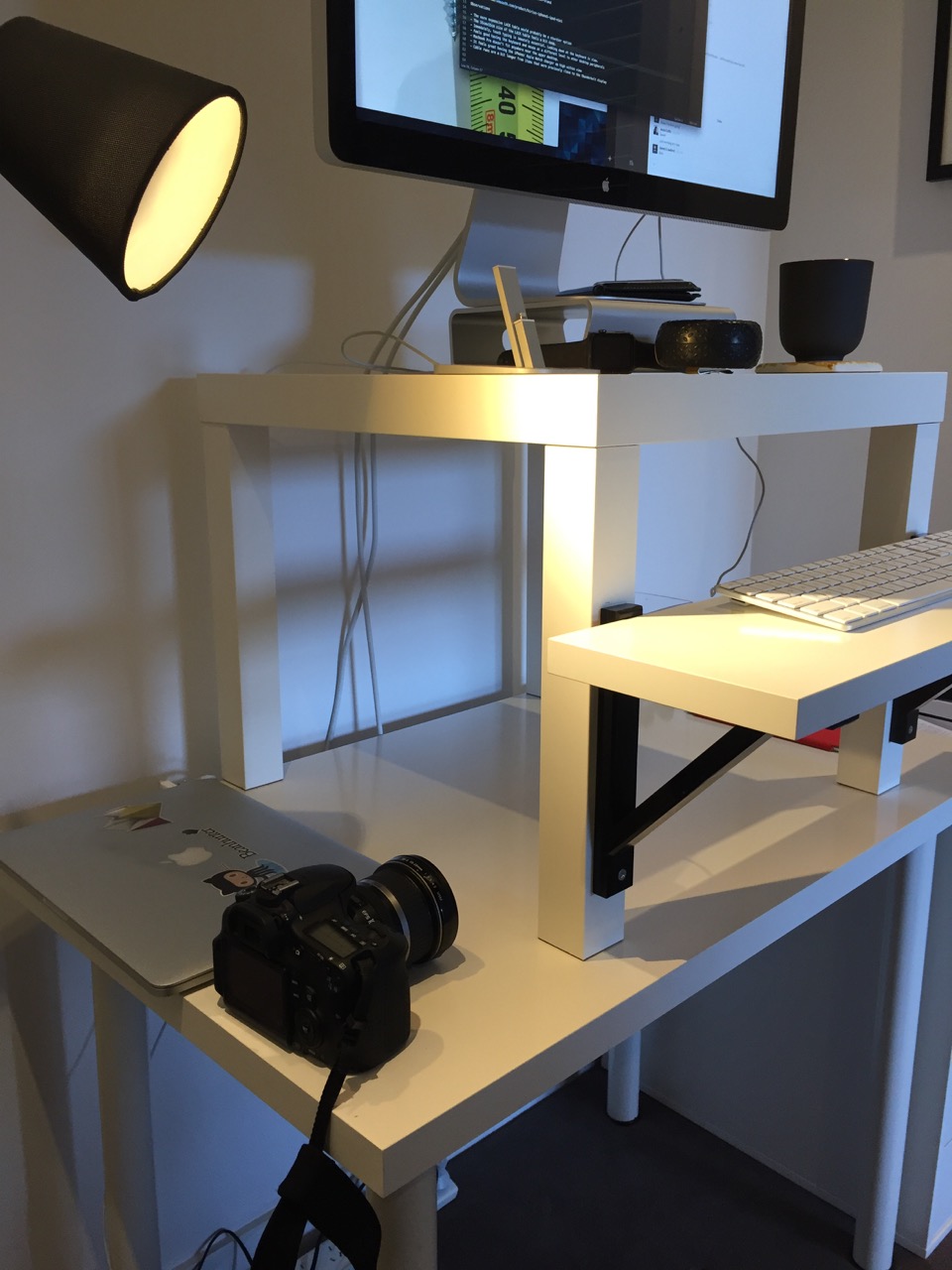 IKEA have a pricier versions of the LACK table and the EKBY shelf that are heavier (less hollow) with better finishes. I think these options are worth considering. At the store I felt the JÄRPEN shelf was much sturdier than the $5 cheaper ÖSTEN. I purchased the JÄRPEN shelf. 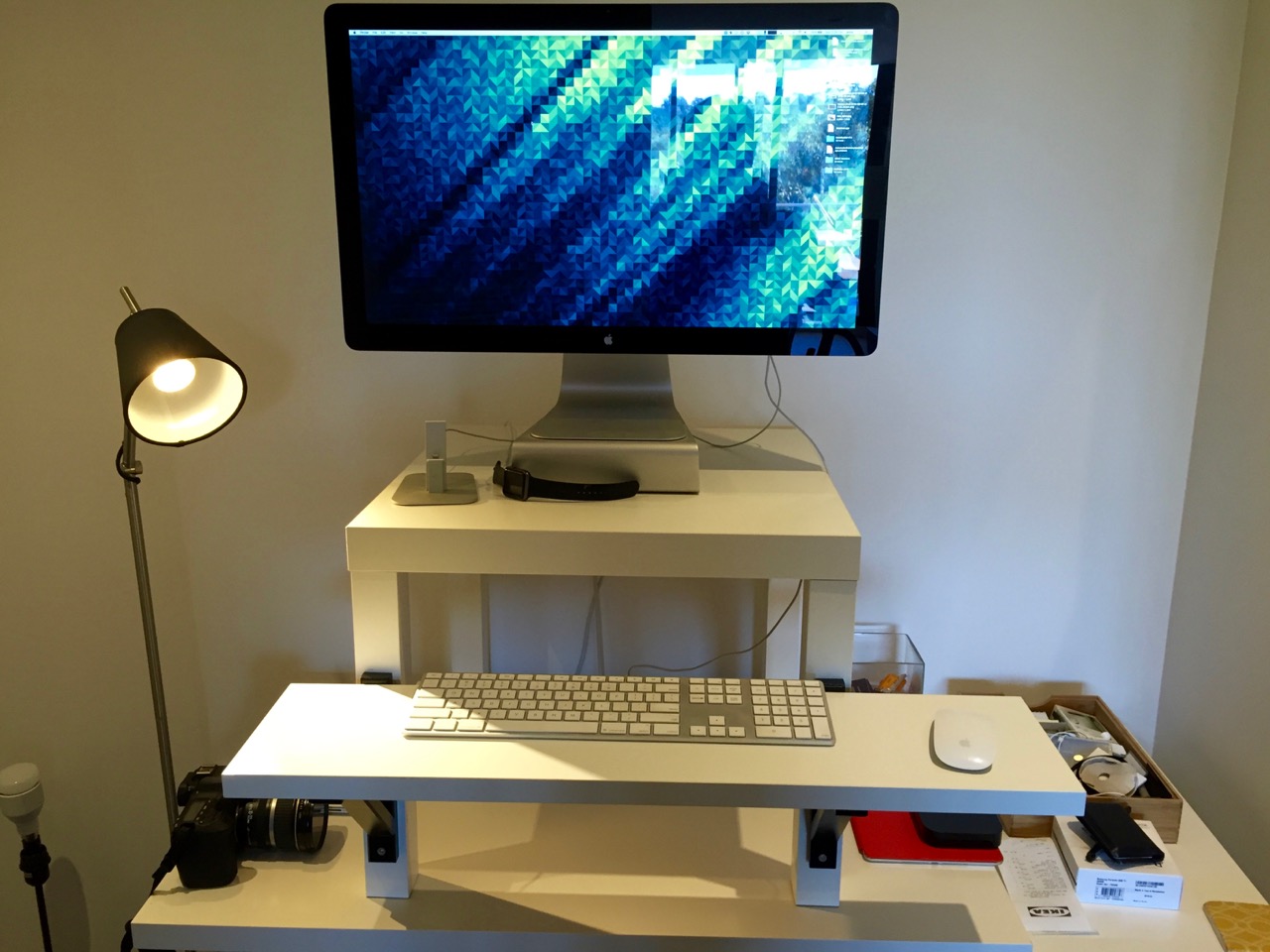 I realised that the remainder of my setup is also IKEA:

It’s straight forward to generate Xdebug profiler output and visualise the bottlenecks associated with running any request that’s run through the PHP stack.

Here’s how you’d install PHP, Xdebug and Kcachegrind (qcachegrind) on OSX 10.9 Mavericks and get some in depth info on your php app. 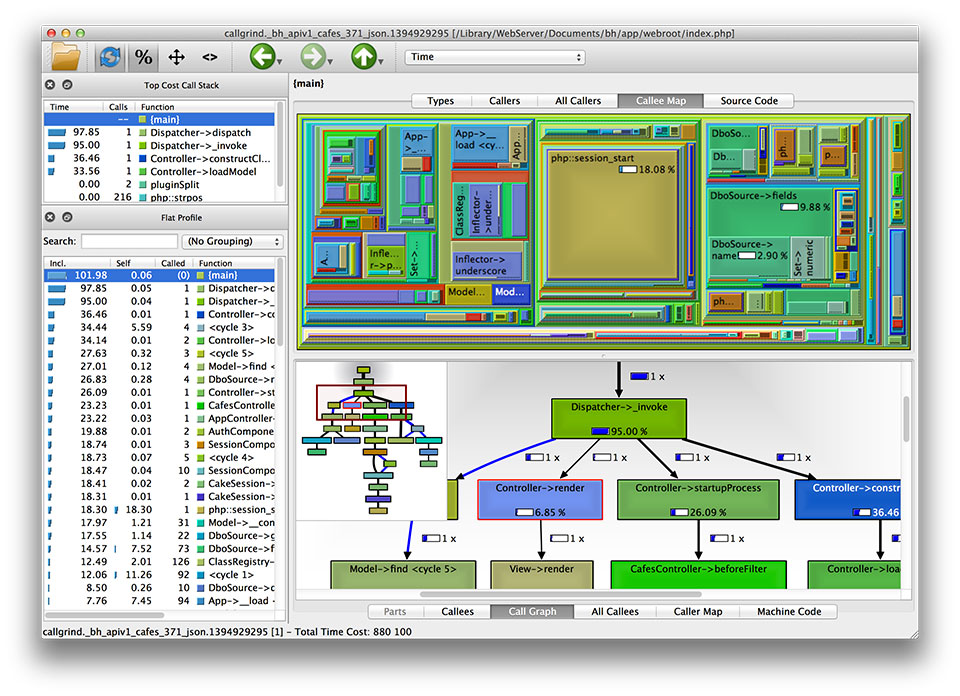 Make sure you have homebrew installed correctly.

The main thing to remember is to add /usr/local/ to your shell’s $PATH. Often it’s best to have it first so it overloads the system’s default applications. brew doctor will complain if this isn’t the case.

PHP packages of OSX are not available to homebrew by default. The homebrew-php repository is the source of truth for PHP related recepies.

The homebrew-php README is verbose, on Mavericks you only need to run the following:

This will give you access to all the php specific formulas.

Once installation is complete the formula tells you what to add to your httpd.conf to run the libphp5.so. Take note of the location of the php.ini file. The system default location is /etc/php.ini.default.

You can get back to the post-install info of any homebrew package with brew info php53.

Open your apache config at /etc/apache2/httpd.conf and replace the existing (possibly commented out) LoadModule php5_module line with the LoadModule line from above.

Restart the apache process with:

The arguments passed to the PHP compiler are visible in abstract-php.rb once you have everything running within apache the same variables are shown at the top of the phpinfo(); output under Configure Command.

The relevant options that will pick up the not-yet-installed XDebug config file and the php.ini file are:

The notes from the installation mention the location of the Xdebug config file.

Restart apache and load up a phpinfo(); page and you should see references to Xdebug.

All Xdebug options are well documented, below are a minimum set of options to get profile data written.

When you change these settings, restart apache and the changes should be visible in phpinfo().

If you’re not seeing logs straight away, it’s more than likely a file permissions issue on the output directory.

The preferred way to install kcachegrind on OSX is to install qcachegrind and AppViz. Both components can be installed with homebrew.

Underneath the hood qcachegrind uses graphviz’s dot application to generate the graphs. dot will be available to qcachegrind if you’ve setup your $PATH correctly above.

After installation you should have qcachegrind in your path and you can launch it with the profile files as the first argument.

As a followup to posting my Localising Cocoa Apps talk I thought I’d outline some of my favourite localised string failures.

The “WTF is the comment for anyway” kind of localisation

The “out of sight out of mind” kind of localisation

Yes, that’s redefining the macro to hide the comment…

The “entire book as a key” kind of localisation

This is in the grey area because good distinct comments can make duplicating keys manageable as good comments show you the key’s appearances in your app in the .strings file.

This is in the grey area because it’s inflexible and implies a structure, but can be okay for small strings. Often you should consider NSNumberFormatter for numbers

Localising the format string too

This is in the grey area because at this point we’ve got localised pieces everywhere. But it’s good that you’re trying though…